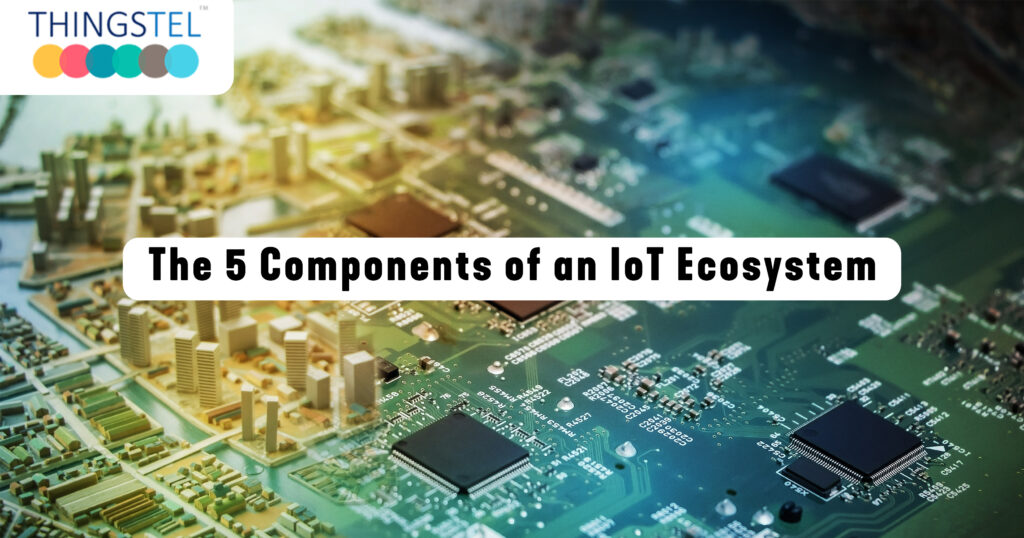 The 5 Components of an IoT Ecosystem

We’ve talked a lot about the applications of IoT across a broad variety of industries and verticals, but understanding the basics of how an IoT ecosystem works is one of the first steps towards empowering the efficiency of our products.

The Internet of Things works across a vast network.  Various components of IoT operate in tandem with each other to form a cohesive system and the devices perform autonomous actions based on the data collected from the connected products. This entire process with its multiple entities come together to form a complex IoT ecosystem.

Let us break down each of these main components of IoT to understand their function and how they contribute to the ecosystem as a whole:

This is the first tier of an IoT ecosystem and consists of micro, physical appliances embedded in an IoT device, responsible for data collection and controlling a mechanism.

All the devices in an IoT network including sensors, actuators, and the cloud need to be interconnected in order to be able to process the data, decipher it and consequently produce the desired action. This is the second tire component of IoT.

Once the data is in the cloud, it has to be processed. Essentially, the cloud is a high-performance facility where large amounts of data are handled, stored and put through major decisions in just under milliseconds. IoT clouds form the brain of the IoT ecosystem, possessing immense computing power, networking options, storage capabilities, service and analytics components of IoT so that information can be made readily available to the consumers.

IoT analytics makes sense of the vast amounts of analog data, and its main function is to convert raw data into useful insights that are later analyzed or interpreted to drive decision-making. An example can be determining the KPI’s in an application where one is interested to find out irregularities or errors in real-time. It can even be as basic as analyzing if a room’s temperature is within an acceptable range or whether a vehicle is about to crash. Many learnings can be derived from the data to predict trends, plan ahead and make vital business decisions.

This component of the IoT ecosystem is the visible component that is easily accessible and in control of the IoT user. The user can interact with the system via the device itself or remotely via smartphones, laptops and tablets. Smart home devices like the Amazon Alexa and Google Home allow users to communicate with the “things” in their home. A user-interface needs to be user-friendly with a strong design.

The IoT ecosystem is a continuously evolving field of study where the components remain the same but the mechanisms often differ depending on the industry, use cases and budget.

Read our blog on Temperature Monitoring and Vaccines here

Do you need an efficient, reliable and secure IoT ecosystem? Thingstel’s next-generation devices and configurable platforms with increased intelligence, reliability and improved accuracy specifications are easy-to-use and come fully-calibrated. Our technologies can empower and strengthen your business, providing you with a wide array of solutions ranging from predictive maintenance to remote monitoring to real-time analytics and data visualization. Reach out to us in case you have any questions or simply want to know more!